In a previous article I explained how we could extend vCloud Director with vCenter Orchestrator and then provided a full implementation. This was using the vCloud Director blocking tasks and notifications feature which allow to extend existing vCoud Director operations.

vCloud Director 5.1 introduced a new feature called API extensions which basically allows a cloud provider to extend the vCloud Director API with custom services with leveraging VMware or third party applications. In this article I discuss why someone would want to leverage this feature and explain the "service builder" solution I have created around it.

The first question you may ask is "Why would you want to extend vCloud Director API ?"

As the vCloud Director Administrator I need to provide a feature not available in the vCloud API to cloud API consumers (i.e. the portal development team)

OK, but then why not use the existing APIs instead of extending vCloud Director's one ?

Lets see some of the common portal / cloud implementations.

The first one is the old fashioned portal calling the vCloud and other APIs. Here are two variations exposing or not the vCloud API. Exposing the vCloud API allows to leverage all the applications consuming the vCloud API. For example a service provider will want his tenants to use vCloud Connector to copy back & forth vApps from / to vSphere / vCloud. This design is IMHO flawed in several aspects:

The portal must include all the automation you would typically put in an orchestration solution. This means re-inventing the wheel to re-create a lot of facilities offered by an orchestration engine, making these operation only usable by the portal or creating a custom web service when thousands of customers already used standard orchestration APIs. This will be a solution difficult to support that will be tied with the scripting language used to consume the underlying cloud and third parties APIs. These APIs will support different types of web services, different type of authentications. 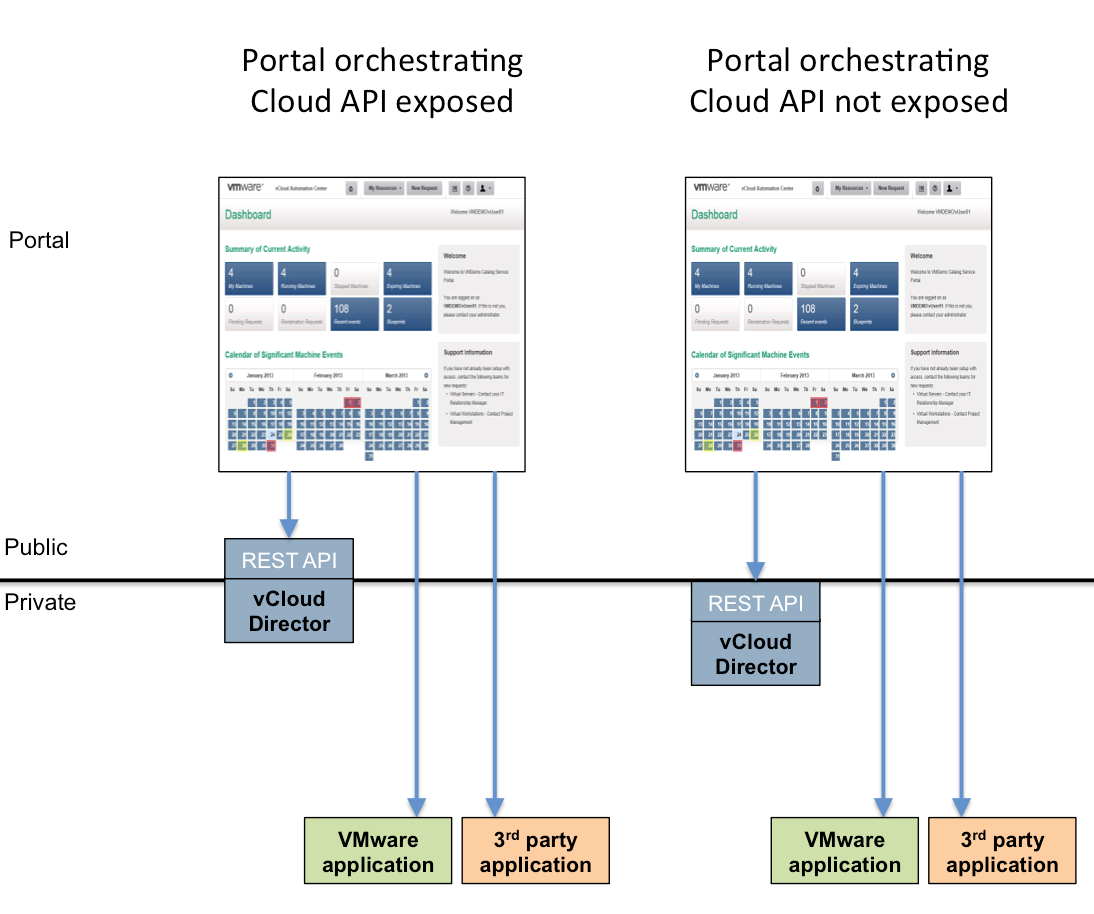 The second approach is that orchestration rules them all ! The portal calls in the orchestrator calling the underlying systems. The two designs below are using this approach with keeping the orchestration API private and either exposing the vCloud REST API or not. The Orchestrator APi could ahve been made public to expose the additional services but there are some serious workflows / resources access control considerations required.

This approach was a good one when there was no cloud API and that the target system was vSphere / vCenter. The Orchestrator would expose a subset of the functionality with using several API calls chained together to perform the desired automation. Using orchestration has several benefits including supportability, modularity, use of hundreds of supported workflows, API abstraction, caching, high availability and many other things I detail in this article.

However this has a few flaws as well. An orchestration engine is meant to automate complex operations. A lot of the API calls started from the portal will be about almost real time operations such as refreshing a list of vApps, presenting information in a panel and so on. I have written about this in details in this article : Building your custom cloud portal - Knowing when to use the vCloud API and the vCenter Orchestrator web service 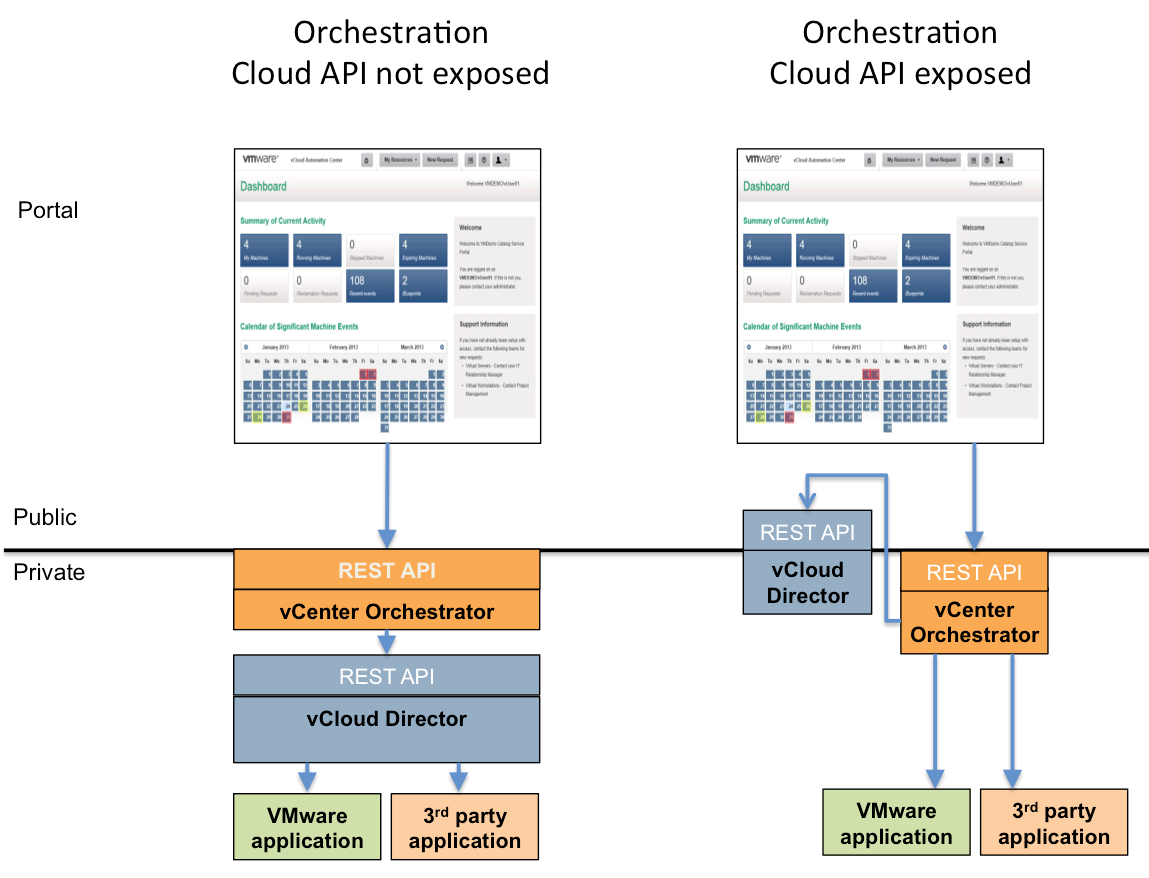 Several successful cloud implementation involving using custom services I have seen have implemented the Cloud & orchestration design below in the left. While this resolve some of the issues mentioned previously it still make the custom services only available to the portal. With vCloud Director 1.5 blocking tasks and notifications allowed to customize existing vCloud Director operations, hence diminishing the number of calls to be made from the portal to the orchestration engine but direct calls to orchestration are most often required for operations required that cannot be started by vCloud blocking tasks and notifications. With vCloud Director 5.1 you can use the bottom right design. 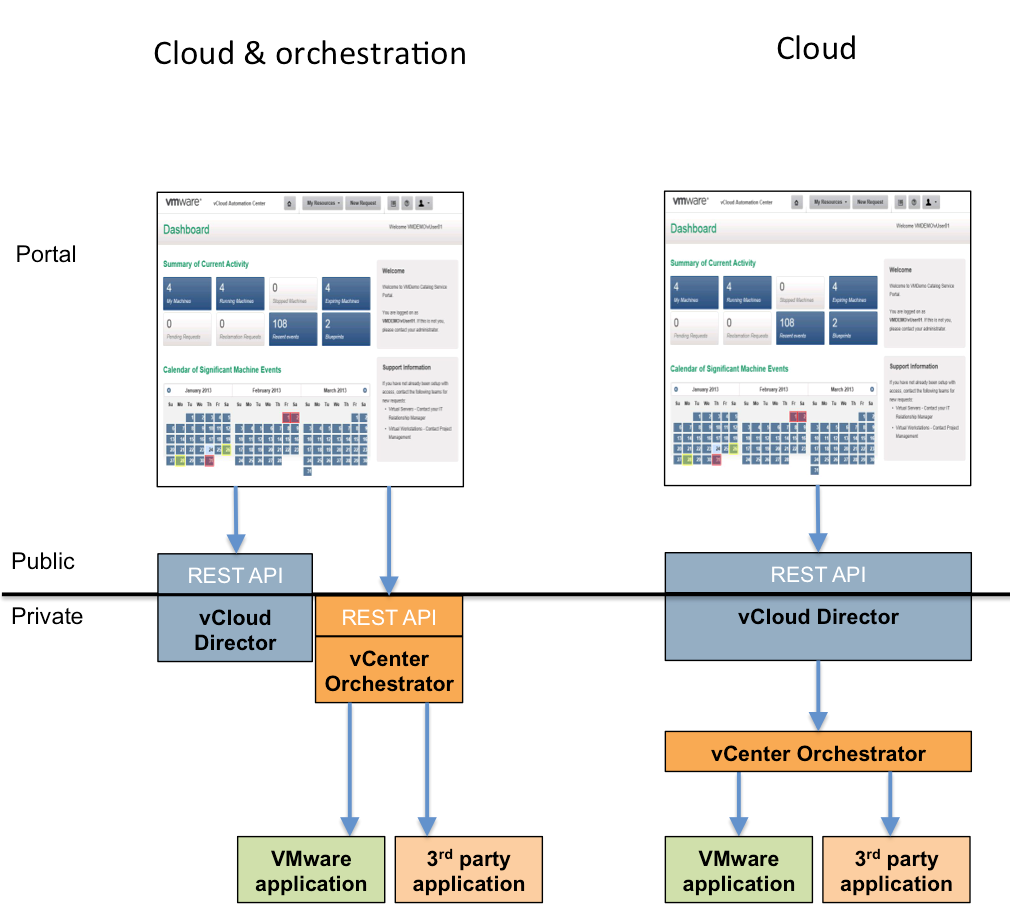 The reasons for prefering this design on the right are the following: As a cloud administrator I do not want to give direct access to my cloud backend applications:

OK but what for ?

There are several use cases for providing functionality that is not out of the box for example:

A lot of these are achievable with the components of the vCloud Suite. There are a lot more use cases with integrating third party systems such as management systems. You can "cloudify" the whole datacenter if needed.

My colleagues at VMware have done an excellent job exploring the API documentation and explaining vCloud API extensions. Here are some references I have used to create "service builder". If you are not affraid of going deep technical I definitely recommend going through these:

I do not have the time to invest a lot of time in these articles and create my services manually. How can I get started quickly ?

And I forgot to mention it is free.

How do I get started with service builder ?

I have put together an online presentation explaining in details :

Note : The presentation requires your Email and organization. This is solely for me to better understand who has interest in this tool and eventually to contact you in case I need further information on your submitted comments. This information will not be used for anything else and not be transmitted. 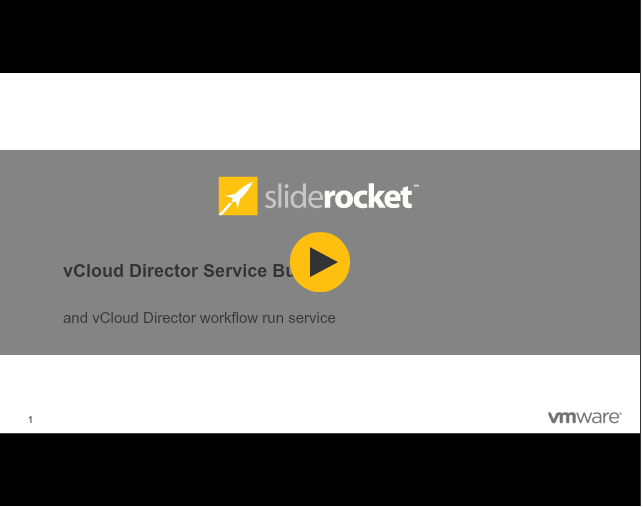 Unfortunately, the presentation has been removed

If you want to go directly to the download page you can find it here.

Christophe has worked at VMware, Inc., where he started in 2007 after VMware acquired Dunes. Based in Gland, Switzerland, Christophe is a global resource supporting customers in their orchestration and automation needs. He has presented orchestration solutions at conferences such as VMworld and is the primary contributor to this site.