Quoting part of the release notes:

The VMware vCenter Orchestrator AMQP plug-in allows organizations to automatically trigger workflows based on AMQP messages. Advanced Message Queuing Protocol (AMQP) is a highly-scalable publish and subscribe message protocol that is increasingly used in cloud architectures. It is the default messaging protocol for vCloud Director 1.5. With the AMQP plug-in, organizations can define policies that automatically trigger specific workflows based on certain AMQP messages. For example, as part of a vApp pre-provisioning activity in vCloud Director, Orchestrator can detect the provisioning request and automatically fetch the IP address from an external system before allowing vCloud Director to proceed with the provisioning activity. When Orchestrator detects that the vApp provisioning is completed, Orchestrator can update configuration management databases and other management systems with information about the new vApp instance.

The AMQP plug-in provides the ability to monitor and publish AMQP messages, as well as to conduct administrative tasks such as configuring AMQP brokers and managing queues. The AMQP plug-in supports VMware RabbitMQ as well as other implementations of AMQP. 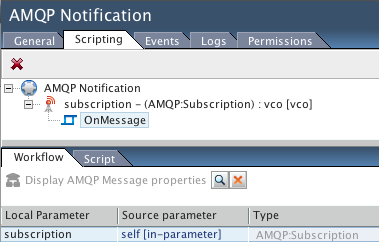 vCO can also publish messages to a queue so an external application can consume them.